Having just about survived being blown off a beach in Belgium, I wasn’t sure that beach racing was really my ‘thing’ - battling a headwind and getting sand in every available orifice. Add to that 2 nights under canvas & I was really wondering what I had committed myself to (or should I be committed)!

Undaunted by these 2 factors, mid-March we headed off to Pembrey for the Howies Battle on the Beach, which was also the inaugural UK Fat Bike Championship.

As the event approached we were watching the weather forecast with added interest to determine how strong the winds would actually be and also how much rain to expect. But it actually looked as though the weather gods were going to smile on us after all.

Arriving on site, I was quite surprised at how many people had decided to camp and also, the sun was shining! The talk around the campsite was all about what the course was like. There were mutterings about puddles of water but I thought to myself ‘how bad could it really be?’ We got the tent up and went for a gentle spin up the beach. Finding a point marked with flags that looked like the exit, we hauled the bikes up & into the dunes. After a couple of ‘not so deep’ puddles, we turned around, headed back to the campsite and the beer that was waiting for us.

Rumours started to circulate about deep ruts and killer puddles! Opinions about the puddles varied from ‘just over the crank’ to ‘waist deep’! Having not completed a lap, I decided that my best option was probably to get my feet wet & carry Bart through the water.

Despite a cold night in the tent, the morning sun soon came out to warm us all up. The park started to fill with racers on every different bicycle type imaginable. We weren’t quite certain how many fat bikes would be racing but with just under 40 of us signing on, there was a lot of ‘fat love’ being shown. 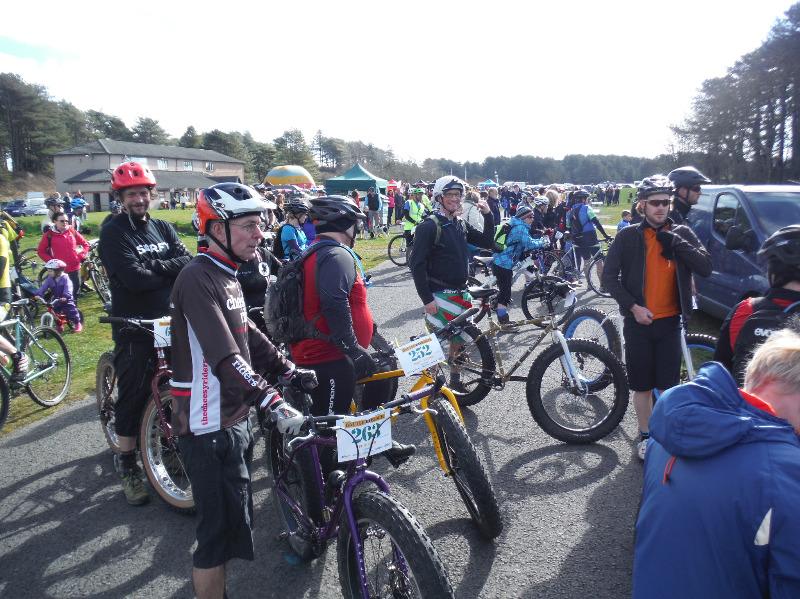 The race start was approaching and the race faces went on. Those with their eyes on the win positioned themselves at the front while the rest of us mortals hung around at the back. 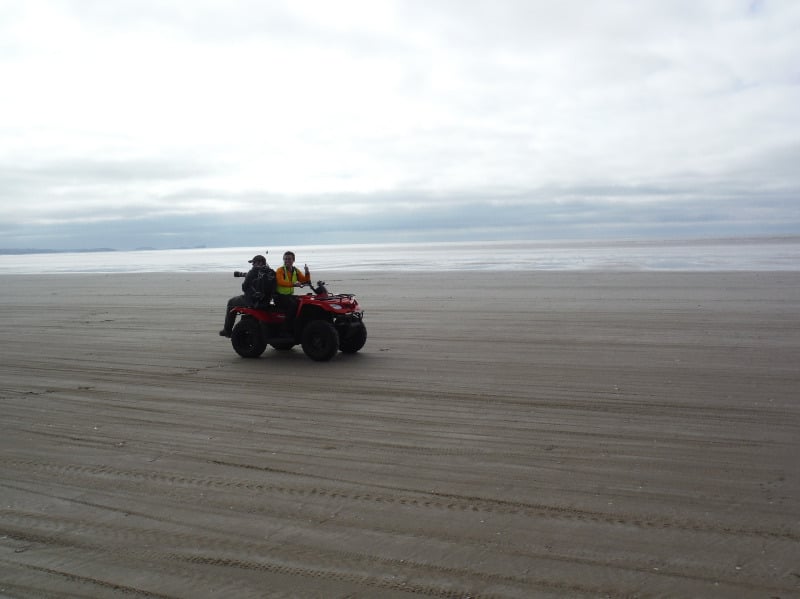 Matt Page, who organised the event, had swapped his bike for a quad, led the field away & released us onto the beach. Bikes were being carried or pushed through the sand, but those of us with 3.5” tyres were able to ride through the soft stuff & onto the packed sand. The field was soon spread out along the beach and was quite a sight. 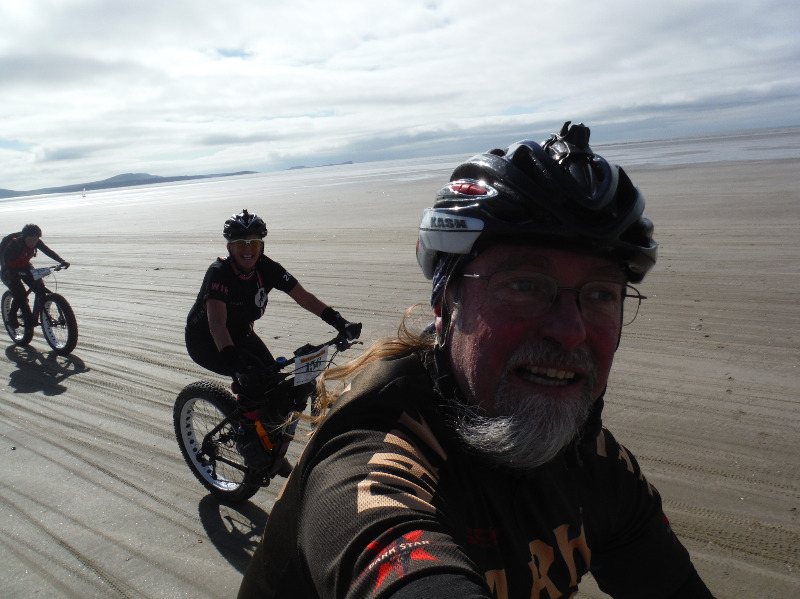 There was a good mix of terrain to ride through – single and double track. Then I saw ‘it’ and ‘it’ had a name: the Puddle of Doom! I stuck to my decision, hoisted Bart onto my shoulder and set off into the cold water. The water was up to my knees and below the surface, the ground was quite uneven. 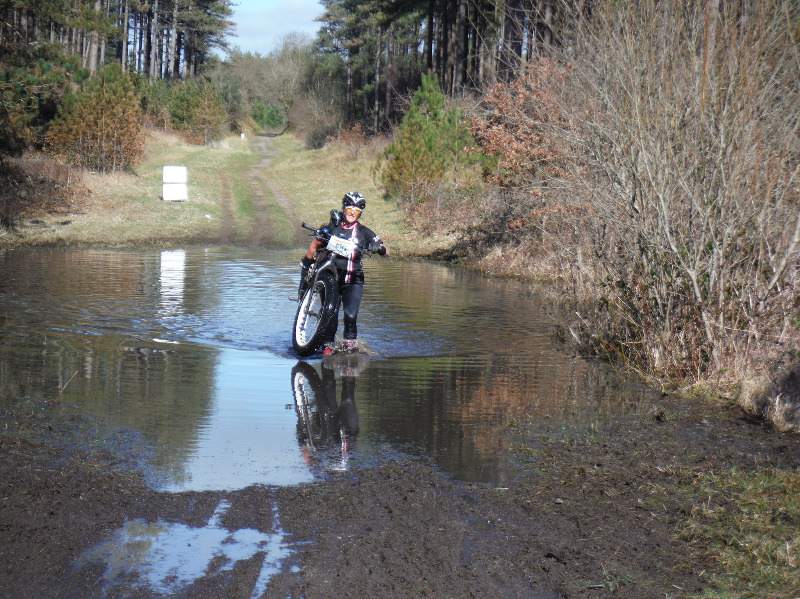 Roy decided to ride through – his BB is easier to replace & less expensive than Barts!!

There were still puddles of mud to ride/walk through but the single track at the end of the lap was really enjoyable – swoopy downs & ups – perfect for the fat bike.

Note to organisers: always end a lap with fun stuff; it will keep riders coming back for more!

We were lapped by the leaders as we headed up the beach for the 2nd time. There was quite a large contingent from Belgium and the Netherlands, and they were giving master classes in ‘how to form the perfect echelon’. The 1st fat bike went past, George Budd on his Beargrease – I have to say that I was not all that surprised. He even had time to pat me on the back as he went past.

We were caught by quite a few riders on that lap & I decided that my best option was to pull to one side & let them go. Lap 3 was looking as though it would be a quiet, but enjoyable lap.

They say that things happen in 3’s: 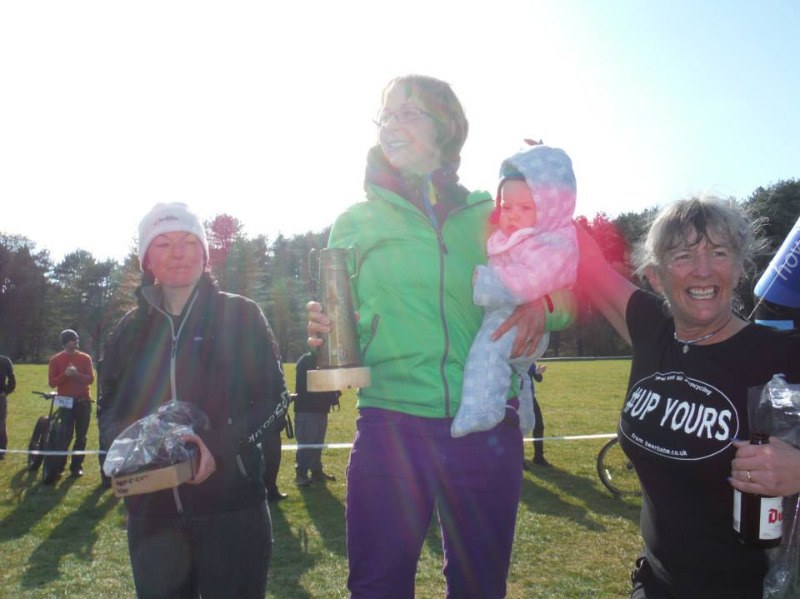 Huge thanks to Matt and the rest of the team for putting on an excellent race. I really enjoyed it. Roll on next year – although it might be a lottery to get an entry!

BTW: for anyone who might be interested, the last time I competed in Wales was the 1986 RAC Rally – also running number 156. & I was 3rd on the podium then as well!!