This time, 2 weeks ago, we were a short time into the Gulbergen24 – a 24 hour mountain bike race that takes place in Nuenen, just south of Eindhoven in the Netherlands. The sun was shining & the temperature was rising (unlike the rain which is falling as I type this)!

It was our 5th appearance at the race which has now completed its 6th running. We missed the 1st year but every edition has been blessed with sunshine. The only time we had rain was 4 years ago where Frans van Dommelen had to start the race in the pouring rain as an errant shower passed overhead. All the spectators were left running for cover.

We started the weekend on the Friday with the alarm going off at some ungodly hour that I only knew existed when I worked for ‘the man’ and was off to catch a flight somewhere or other. This time, our mode of transport was the Channel Tunnel and we were trying to catch a break on the Antwerp ring road by getting an early crossing. It wasn’t too bad & we were able to stop off at Achel for a spot of lunch & to buy a few beers from the Abbey shop which is located there. 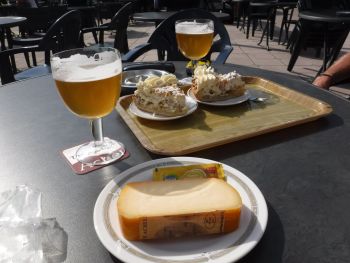 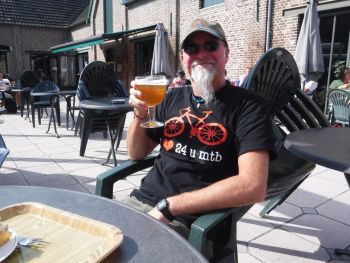 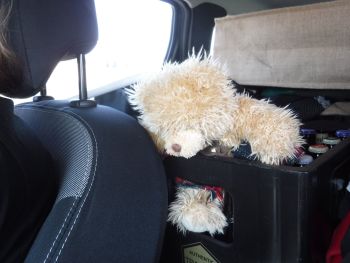 Friday afternoon is also not the best time to head towards the venue but David, our Sat Nav, found an ‘interesting’ route into the venue. But it was effective & avoided the worst of the traffic.

We found our campsite, signed on, put up the tent & were left with enough time for a practice lap.

This year, in addition to the main race, the organisers put on a special event on the Friday night – the Gulbergen Juniors. This was hosted by local superstar mountain biker & Olympian Rudi van Houts and was a number of fun activities designed to inspire young mountain bikers. They even got to do some night riding – something to be encouraged at all ages.

Couple of beers & off to bed. Tomorrow would be a long day. The night was pretty cold & we hoped that the forecast 14 degrees for the following night was correct. 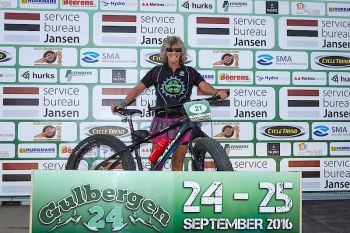 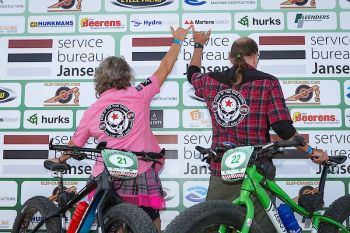 Over the 5 years of competing at Gulbergen24, we have made lots of friends and have become part of the furniture. Sitting down to eat a full English breakfast on the morning of the race barely gets commented on but it does help to settle the nerves. 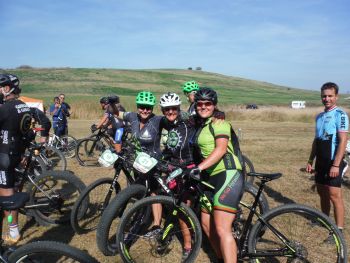 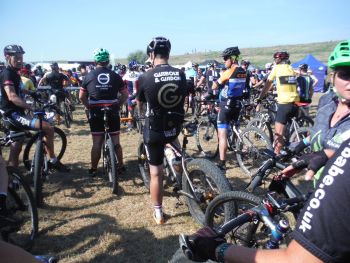 All too soon, we were lining up ready for the 1pm start. In addition to the 24 hour race, there is a 6 hour race and those whippets were sent off 1st. Even though the start was staggered there was still a hold-up to get through the beer tent (!! Yes really) before the 1st climb of the Gulberg – an old landfill site which provides a 200 foot climb every lap & gives the event its name. The descent though is amazing with around 9 switchbacks to master which get rougher as the race goes on. It makes for some great photos though as some riders get it right & some don’t!! 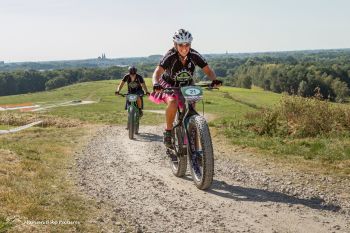 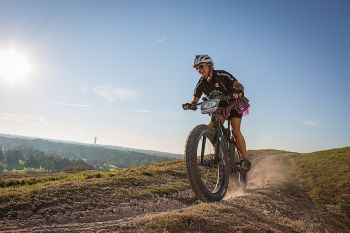 The course then goes over the Eindhoven canal and into the woods. The 1st part is sand – which was great on the fat bike but I’m sure others cursed it. The rest of the lap is mostly single track but there are places to pass & other places where patience is required.

Back over the canal, back through the beer tent & it’s time to climb once more.

24 hours is a long time so we weren’t in any rush, but the 6 hour racers were so, after 6 laps, we decided to let them get on with it & have a rest. Roy had been ill during the run-up to the race so I headed out for another lap on my own but good sense prevailed & I took a break. 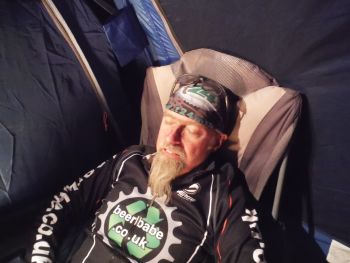 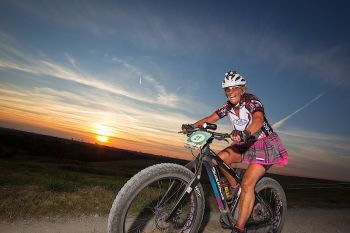 I was doing my usual trick of getting really sweaty and this was made worse as the temperature rose. As a result, the dust was sticking to me & it got to the point where I was becoming unrecognisable. OK so the pink tutu I wore throughout the race was a giveaway, when I put my Dry Rode on to keep warm, I looked rather scary. 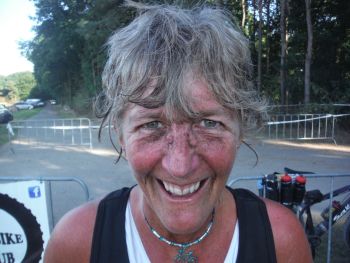 The 6 hour race ended & the race headed into the night. I do love night riding but I found it harder to work out where I was on the climb up the Gulberg in the dark. The new Exposure Maxx-D lights were amazing as were some of the night photos. 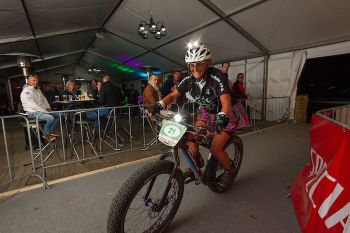 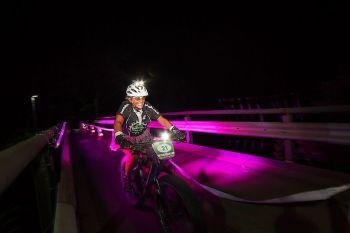 As the night progressed, Roy was starting to struggle & so I headed into the night for a block of 3 laps. The location of our campsite just off the course was ideal as we could take our breaks after the climbs & start out fresh to enjoy the woods.

Whoever had said that 14 degrees was forecast overnight had obviously not noticed that it was in Fahrenheit & not Celsius. Man it got cold & this caused a break in the race for us. Only 1 thing for it, at 1am we were in the bar having a beer with a couple of the organisers! 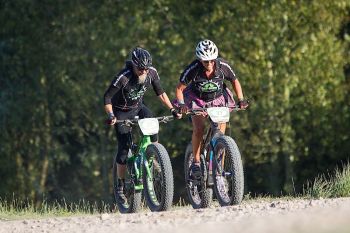 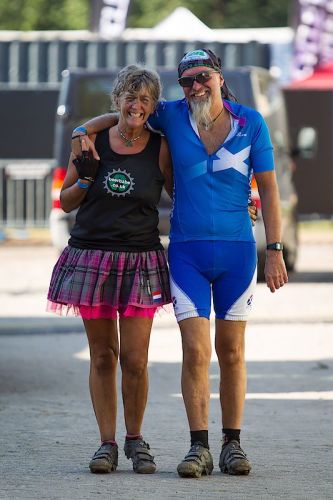 We managed around 4 hours sleep and then we were back out again. The chilly morning soon warmed up as the sun came up and we rode as many laps as we could. All too soon, we had made our final climb of the Gulberg and we stopped off at the tent to change clothes and collect our finish beer which we stashed in the shade just before the finish line.

I still giggle as I follow Roy riding his fat bike in his kilt. 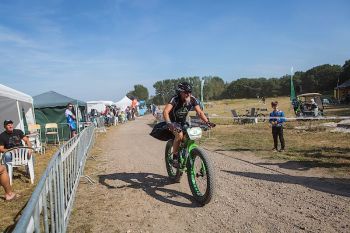 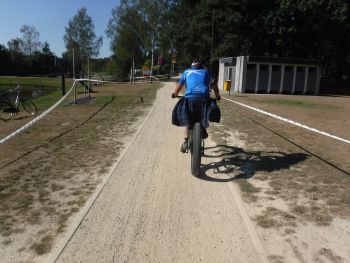 We crossed the canal for the final time & headed towards the finish. The reception we got from our fellow competitors who were waiting for team mates to complete their final lap was quite humbling. I’ve never had a reception like that before. There were even louder cheers as I retrieved the beer, we opened the bottles & rode over the finish line together. Our beer of choice this year: Firebird Brewing Noble IPA. 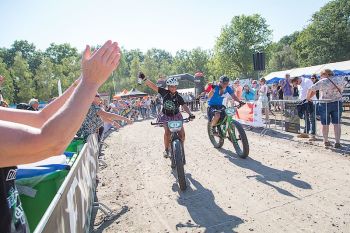 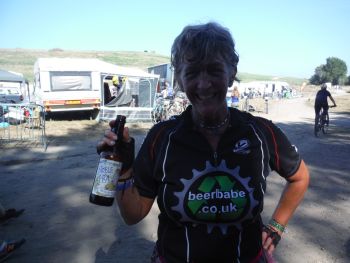 To top it all, I made the podium as 3rd solo lady. I was also the 1st fat bike & got the award for the most km’s ridden in a pink tutu! 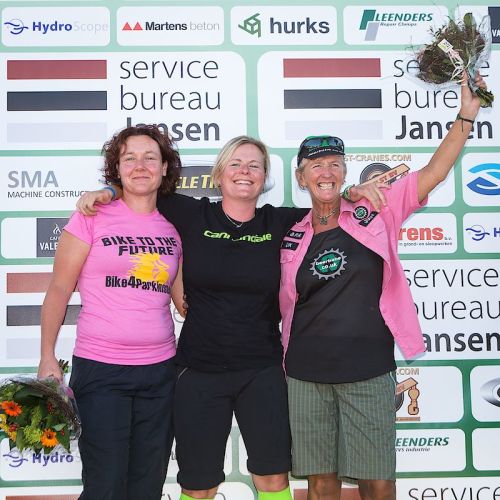 What a great event – can’t wait until next year! The organisation, competitors and supporters make it so friendly and enjoyable.

Also thanks also to Connie Sinteur & Marian Bike Pictures for all the amazing photos.

BUT – a note of caution - One of these years it will be wet!!